To celebrate Hispanic Heritage Month, the PGA of America is highlighting the Latinx community members making a lasting impact in the golf industry through PGA of America and PGA REACH programming. In this edition, we celebrate student-athletes from the PGA WORKS Collegiate Championship, the most culturally significant championship in collegiate golf.

The Latinx influence on the PGA WORKS Collegiate Championship has increased significantly in recent years, with many players from the community achieving the highest levels of success at the tournament each year. Most notably, reigning champions Yudika Rodriguez and Ana Candela Ferreyra-Heit of Bethune-Cookman University in Daytona Beach, Florida and Sofia Alvarez, who competed in the tournament for North Carolina A&T University before graduating in 2018 and has now gone on to work for the Connecticut Section PGA as a PGA WORKS Fellow.

Sofia Alvarez is an example of what PGA WORKS aims to deliver, increased awareness of career opportunities in golf in hopes that student-athletes remain in the industry.

“This is more than just the average golf tournament,” added Alvarez. “The PGA of America is trying to diversify the golf industry and that’s what this tournament is all about. Playing great golf and learning about careers in the industry from the best at the PGA changed my life. They helped me acquire a PGA WORKS Fellowship which has been the best professional experience of my life so far.”

Originally from Venezuela, Alvarez played two years in the championship competing in the Women’s D1 Division. She finished in the top 10 twice and had a top five finish in 2018.

“This was always the last tournament of the year, and it was very exciting knowing it’d be played at a PGA of America course hosted by their staff,” claimed Alvarez. “Not only was the course amazing, but the career opportunities made this tournament my favorite of all.”

Yudika Rodriguez, a 2019 Graduate of Bethune-Cookman University, won each of her four years playing in the event across multiple divisions. Originally from Puerto Rico, Rodriguez’s love for golf stemmed from early childhood, when she competed in Puerto Rico Golf Association events and AJGA events across the world. Her impressive career record at the PGA WORKS Collegiate Championship consists of four D1 team championships and one Women’s Individual title from this past year’s championship, where she shot 8 under par through 54 holes at PGA Golf Club in Port St. Lucie, Florida.

“I always wanted to perform my best at this event specifically because it is uniquely different from other college tournaments seeing that it is managed by the PGA of America,” said Rodriguez. “From the PGA Championship level course preparation to the hospitality of the staff, it all makes this tournament a huge deal for all of the student-athletes.”

The reigning Women’s Division champion mentioned other components of the event she anticipates every year that make the PGA WORKS Collegiate Championship more than just your average college golf tournament. Instead, it’s a week filled with memorable experiences.

“Not only does the tournament exceed normal collegiate expectations, but the PGA WORKS Career Expo also held that week provides all players an ability to network and potentially acquire a job in the industry in a field they’re studying,” added Rodriguez. “It’s really a rewarding experience.”

“Since all of the teams stay in the villas together, I often found myself also making new friends,” added Rodriguez. “We’d often go down to the pool and interact with each other after our rounds were finished. You make new friends, and some remain in your life past the tournament for a lifetime.”

Another participant and former teammate of Rodriguez’s, who has shown early success in her PGA WORKS Collegiate Career has been Ana Candela Ferreyra-Heit. A junior at Bethune-Cookman, Ferreyra-Heit was born and raised in Buenos Aires, Argentina. She was bit by the golf bug after her mother recommended the sport. At the end of Ana’s first year playing, she qualified for the Argentina Association of Golf’s National Junior Tournament, which she won at age 10.

Following her early accomplishments, Ferreyra-Heit was recruited to play college golf in the United States. She first competed for Delaware State University, before transferring after her freshman year to Bethune-Cookman, the 11-time PGA WORKS Collegiate Champions.

“I love to compete,” stated Ferreyra-Heit. I don’t like to lose, and that’s why I transferred to Bethune-Cookman. There is a culture of winning and it is the standard you are held to at all times, especially when you play in the PGA WORKS Collegiate Championship.”

She’s currently a reigning member of the Women’s D1 championship team. She also finished in second place in the Independent Women’s Division in 2019.

“I love this tournament, it’s the best one I’ve ever been a part of,” added Ferreyra-Heit. “Everything about the tournament is perfect. It’s organized, and you can tell the staff puts in the extra effort for us to have a great time.”

“The way the PGA presents career opportunities to international students like me at the PGA WORKS Career Expo is also always greatly appreciated, because it isn’t easy for us to find opportunities. Knowing that a career in golf is possible once I’m done playing provides hope for my future.”

The PGA of America and its charitable foundation PGA REACH continue to increase their efforts to diversify the golf industry’s workforce through strategic engagement with Hispanic and other diverse communities. This intentional outreach is designed to engage these communities in order to have the golf industry workforce mirror America.

PGA REACH, the 501(c)3 charitable foundation of the PGA of America, designed PGA WORKS to help their diversification efforts. The PGA WORKS Collegiate Championship in particular, is the signature golf event of PGA WORKS, offering 200 student-athletes annually from Hispanic-Serving Institutions and other minority-serving institutions an opportunity to compete in the most culturally significant championship in collegiate golf, while simultaneously exploring internship and entry-level employment opportunities with the golf industry’s leading employers at the PGA WORKS Career Expo during the same week.

To learn more about careers within the PGA of America, visit careers.pgahq.com. 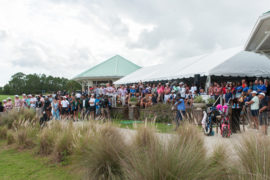