PGA Jr. League is a game-changing opportunity for boys and girls to learn and play golf. The program brings family and friends together around fun, team golf experiences with expert coaching from PGA and LPGA Professionals.

The key youth initiative of PGA REACH, the charitable foundation of the PGA of America, PGA Jr. League is shifting the perception of youth golf and the way the game is learned and played. PGA Jr. League is comprised of local golf teams playing in friendly competitions that encourage both skill development and team-building. PGA Jr. League is played in a fun and exciting scramble format, where two players per team compete at one time,  the best shot from the two is selected and the shot is played until the ball is holed out. Teams wear numbered jerseys and play four nine-hole matches per game, with the ability to substitute players every three holes, ensuring that all team members have the chance to participate. Similar to other youth sports, this format allows new players to fully engage in the game by learning in a team environment first, and working toward a higher level of performance later. This encouraging and fun atmosphere keeps kids engaged and interested in continuing to play golf as they grow older.

Following the Spring/Summer Season, 10-player All-Star teams are formed from a combination of players in each league. Teams compete in their Section Championship to determine who advances to one of twelve Regional competition sites across the country. The winner of each Regional advances to the PGA Jr. League Championship presented by National Car Rental at Grayhawk Golf Club in Scottsdale, Arizona.

PGA Jr. League provides an opportunity for PGA and LPGA Professionals to engage diverse groups at a young age and increase their participation in golf. As PGA Jr. League continues to grow and gain visibility, and with the support of prominent PGA Jr. League Ambassadors Michelle Wie, Rory McIlroy, Rickie Fowler, Lexi Thompson, Alex Morgan, and Stephen Curry. We anticipate further increases in participation, especially among those of diverse backgrounds.

Through PGA REACH’s partnership with DICK’S Sporting Goods Foundation and its Sports Matter Grant, scholarships are provided to players who qualify for financial assistance or are from military families. We will continue our outreach to ensure that PGA Jr. League represents the true diversity of our country.

We also envision a global future for PGA Jr. League given its current momentum in the United States. The PGA of America has worked with varying entities to start piloting the program in a number of markets internationally, including Canada, China, Europe, New Zealand and South Africa. For more information about PGA Jr. League, please visit pgajrleague.com. 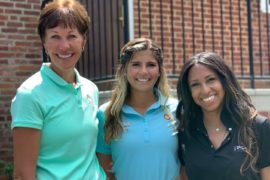 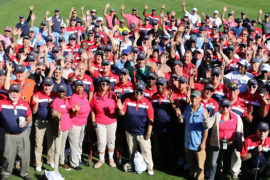 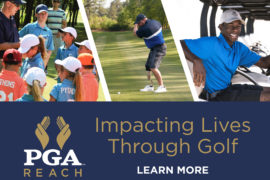